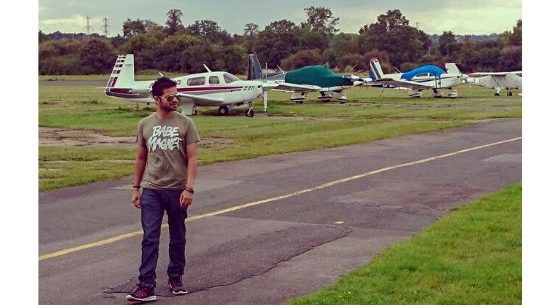 I can’t forget that morning, nor can I forget those words I said – “Control Tower – Golf Bravo Charlie Uniform Hotel ready for take-off.”
And there I was in my Cessna 152 on the runway ready for ATC to give me clearance to take off and fly away into the infinity.

Time for a recap before the main journey to how it began – The year 1986 saw an American action drama “Top Gun” which was screenplayed from an article three years earlier under the same name. The film starred Tom Cruise along with others and not going in much detail about the movie, the only important part of this introduction is Tom Cruise, the guy who brought in fashion with Aviators sun shades for the new generation, new heroes and the young boys. A trend was to fly and fly wearing Aviators, and guess what I was born in the same year but I watched this movie in the mid-’90s and since then I wanted to become a pilot, and many many years later that dream came true wherein I got the opportunity to taste what sky feels like, seated inside the cockpit, wearing my Aviators communicating on my radio to the ATC to give me clearance to take off.

Stars Fly Flying School is located at the historical Elstree Airfield, near North London. This was the flying school I chose to learn to fly, and this was one of my first trial lessons to understand the fundamentals about flying and on completing it then move on to the complete the rest flying hours and examination to obtain the PPL license.

About the Aircraft – Cessna 152

Time to Roll – Let’s put our stylish Aviators and Begin

There are always rules when it comes to driving, riding, and flying, we need to do our groundwork and this being my first lesson, learning the basics was most important. You know guys even while writing this I can reimagine the whole scene of my first day, it is so fresh even now.
the basic step was to Walk Around the plane and check around if there are any possibility of trouble spots or anything obvious like a popped rivet or a tear in the wing casing or flat tires or a nick in the propeller which might be a cause for grounding the Cessna 152.
Next was to crawl up on the wheel mount and unscrew the cap on top of each wing – that’s where the fuel goes in. Full is good, empty is bad, they said and when I checked it it was kept full. Then we had to undo the tether connecting the plane, and there it was all ready to be taken where ever we wished.
And now it was time to be seated in the cockpit and below images show how the cockpit and the control panel looks like. Remember this was my first lesson so I was not alone, I had my trainer David Benfold along with me who was guiding me all along. David asked me to do the Seat Belt and Harness and gave me the complete details about the control panel, and after explaining handed me the keys to start the engine. And boy it ain’t any bike or car keys it was an airplane key wow, I had butterflies in my stomach, but I had to be calm and control my excitement and I took the keys as told put the ignition on. David asked me to flip the two red switches labeled Mags into the up position. then I had to pump the primer a few times, primer is basically in the center of the dashboard looked like a thing we used to launch the ball on an old pinball machine.
And now I was breathing bit heavy as David said time to crank the engine to start position, and there the engine was purring and I was all set to go, and then we maneuvered and slowly we started moving outside the plane’s parking position towards the Runway.

While moving towards the runway David asked me to communicate to the Control Tower to ask clearance to take off, and that’s when I switched my communications on and started
“Golf Bravo Charlie Uniform Hotel to Control Tower”
“Control Tower – Go Ahead”
“Golf Bravo Charlie Uniform Hotel is ready to take off.”
“Control Tower – Golf Bravo Charlie Uniform Hotel you are cleared to take off from Runway No 1.”
I don’t think I would ever be able to forget this moment in my life.
And there it was the runway in front of my eyes and sky ready to open its doors for me.
Little more info to flying is that now David had asked me to steer the plane with rudder controls, and accelerate the plane by pulling out the throttle knob smoothly, he said that we need to reach to 55 knots steady, and now the plane started taking speed slowly and once we reached 55 knots David asked me to pull back the control and just look at the infinity beyond you and keep climbing and there I was just staring at the clear blue skies and slowly leaving the earth and breaking ties with it. And do you know what guys this was my first ever take off into the sky as a Pilot? And then we kept climbing up to 1,000 feet and flying smoothly, after few mins David asked me to take the plane up to 3000 feet. I could see the other planes flying and could even see the bigger aircraft flying over me and be able to see their tales.
We were flying around at 5000 feet on 90 knots at a smooth comfort and all I could see the beautiful world around me. And this was like the best feeling ever. I felt like flying forever and I wished that I never had to turn back or land down again to earth.

How much ever we never want something to end, it does and in the same manner, my 30mins of flying were about to get over. During such moments I feel time runs so fast, but I had understood this is just the beginning, I had tasted life, and now its gonna be flying forever.
So now we were done with our flying circuit which meant we were flying in circles above the Elstree Airfield. Now David asked me to a Downwind check which is nothing but a basic inflight safety roll call that pilots need to do.
“Master on, mags on both, carb heat hot, mixture rich, primer down and locked, engine, oil temp and pressure good.”
David asked me to contact the Control Tower once again and this time it was to request permission to land.
In the same manner, I contacted the Control Tower:
“Golf Bravo Charlie Uniform Hotel to Control Tower”
“Control Tower – Go Ahead”
“Golf Bravo Charlie Uniform Hotel is requesting to land at Elstree Airstrip.”
“Control Tower – Golf Bravo Charlie Uniform Hotel you are cleared to land from Runway No 2.”
Now slowly we were bringing the plane to a lower altitude and at around 500 feet we were gliding, the engines were turned off, now we were slowly pushing the control for a slow descent at about 100 feet we gave a little throttle again, and now it was David who had asked me to just look and learn how to land, as during the very first lesson they don’t allow the pilot to land on himself, as it can be scary and there is a higher possibility of a plane crash, so what I could see and learn is he pulled the controls a little so that the rear wheels could land on the runway before the front wheels. once we were down David quickly close the throttle and started to apply the brakes gently and the plane came into a halt.

The love for flying

There it was my first encounter with Flying and since then I have never looked back, and hopefully, soon I would write one more article when I would get my PPL Licence in hand. 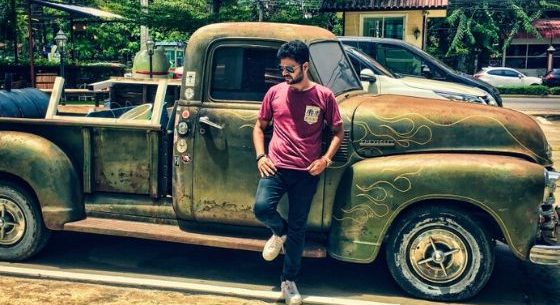 I visited Chiang Mai, a beautiful city in Thailand in August 2019 and as usual, it was a boring business trip, and a trip which was expected to be over in 2 days, took more time as I landed in

Read More about A Small Hello to Chevy 3100

There is no greater pleasure than seeing dreams come.true. Top Gun has been my love too. And it’s soo good to hear that you were inspired by it and then became a pilot too!

Wow Romeer, this definitely seems like a lifetime experience. Flying your own chopper is like a dream come true and only few lucky ones get this opportunity.

Okay, this looks so cool! I have never had this experience of being a pilot. It looks wonderful!

It was super exciting to know your flying experience ; indeed a lifetime one. And got to know so many things i never knew of. Cheers

This experience is gold! Loved reading about your experience in detail. Great read. Got to know so many exciting things.

This experience is so adventurous. Loved reading about your experience in detail. Great read. Got to know so many exciting things.

Woah romer! These informative content are rare to find so easily on internet. I hope I too get to experience

This sounds like a wonderful experience. I had given a comment earlier. No idea why it isn’t approved yet.

You are a very good feature writer sir, I just bookmarked your site waiting for your future blogs, I just can’t move on you are a very great writer. I read it all and it was amazing, each word and paragraphs are worth it. I felt like I’m reading a blog written by someone who won a Pulitzer prize ❤️❤️❤️❤️❤️❤️❤️❤️

Very good post. Highly informative for those who would love to fly. Keep up the good work.